Our History...
“In the early 1970s we moved to the Western Highlands of Scotland to do the good life and ran a bed and breakfast business, creating an alpine garden around a row of derelict cottages we renovated. Visitors were keen to have some of the plants we grew so I sold them for 50p each. We joined the Alpine Garden Society and signed up to seed exchange schemes and created an alpine nursery in the front garden which, ultimately and amazingly became more lucrative than the guesthouse.”

A decade on Ray and his wife Linda sold the nursery and moved to south Devon with their two young sons Adam and Martin, towing a horsebox full of plants behind their Cortina estate from one end of the country to the other, not once but twice. “We bought a north facing hill-top field and a house in Newton Abbot, unable to afford the lush, south facing river-valley of our dreams,” says Ray, who had spent happy holidays in the country as a child. “In our first year we grew strawberries and fuchsias to create instant income and in 1986 laid out the garden, the first in the country to be arranged as a map of the world.” 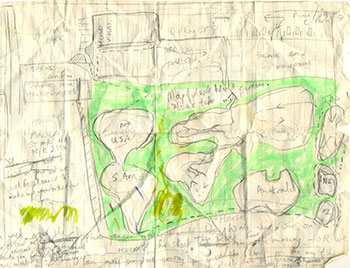 Original sketch map/plan of the gardens from 1985

Early visitor guide c1990
Fast forward to the present...
The four acre garden is now used as a nucleus stock for seed collection and division, fuelling Ray’s business as seeds man and plant breeder. “I’d always loved growing plants from seed but in the 1980s there were very few suppliers offering a very limited selection. It was difficult to find seed of rare or unusual plants so we collected seed from the garden, made handwritten labels and a basic black and white catalogue and started from there.”

Today the catalogue is 71 full colour pages of temptation, crammed full of choice ornamentals and vegetables, including 58 tomatoes and many heirloom varieties. With the advent of the internet the seed business has gone from strength to strength and the online catalogue has outgrown the rest of the business, able to offer seed that Ray acquires in small amounts, for instance the baobab brought back from a trip to Guinea Bissau. “Every morning we have orders from across the globe, and we now source seed from around the world too, though we grow as much as we can ourselves. From May to Christmas we’re constantly collecting seed.” After cleaning the seed is stored in a very dry cold room at a temperature of 2 degrees Celsius, to keep it dormant.
Plant breeding is almost an obsession for Ray, also a keen fisherman and runner, and his enthusiasm is infectious as he talks about the process. process. “I love experimenting with plants. It’s just so exciting because you never know what’s going to come up. It gives you an adrenalin rush a bit like hooking a big fish, and when buds form on a plant you’ve bred you’re desperate to see them open. If it’s good you could have created something that will be tissue cultured by the million in the future and sold all over the world.” Results of Ray’s breeding projects are seen in many gardens here and abroad - erysimums with split colours such as ‘Plant World Lemon’, deep red Heuchera ‘Crimson Curls’, fragrant aquilegias such as Aquilegia ‘Perfumed Garden’, and a red campion with lemon yellow leaves, Silene ‘Ray’s Golden Campion’ to name but a few. Golden foliage plants are a particular favourite and Ray is currently working on gold leaved lupins and penstemons, both with blue flowers.

As well as hand pollinating to create new plants, a process which can take years, sometimes decades to produce a plant ready for sale, Ray also selects naturally occurring seedlings that appear promising. “With some plants you just have to spread seed and see what comes up. Erysimums are receptive to pollination for just a few hours during the life of the flower so they’re impossible to hand pollinate with any accuracy. Just leave it to the bees and see what they come up with! I have a bank of Erysimum ‘Bowle’s Mauve’ hybridised with dwarf wallflowers flowering at the moment and if any of the plants look compact and have good colour I’ll select them out.” Ray is a business man as well as plantsman, so he looks for the commercial potential in a plant as well as aesthetic appeal. “There are many considerations when selecting new plants - hardiness, long flowering period, drought resistance, whether it will stand well in a pot at point of sale, and novelty too of course!”

Some gardeners may baulk at gold leaved and variegated plants, but just think how dreary the world would be if all leaves were green. Thank goodness Ray Brown’s childhood delight in plants and flowers matured into such a creative adult passion.

This is an edited extract from an article by Carole Drake published in the English Garden Magazine, March 2012
All images are copyright Plant World Devon Ltd.